The beekeeping year starts in the early spring, about March, when the temperatures start to rise and the daylight hours noticeably begin to draw out. The colony, having survived the winter by clustering together in the shelter of the hive, keeping warm and protecting the queen, begins to stir. With comparatively low numbers and with little brood having been produced over the winter to provide replacements, the colony is ready to get busy foraging and bringing much needed pollen and nectar into the hive. The early flowering plants including willow, snowdrop, and crocus provide the opportunity and the forager bees don't miss the chance whenever the weather permits. The appearance of fresh pollen and nectar in the hive triggers the queen to increase egg laying which has the effect of increasing the overall colony activity from simply keeping warm to foraging, nursing the brood, feeding, storing and other duties including scouting. Scout bees will start searching around on good days as soon as the spring flowers arrive, prepare and set swarm traps in mid April, the scouts will locate them and will increase the chances of you catching a swarm later.

Download the Petrus Monthly Round a handy round-up of monthly apiary tasks kindly written up by the late Eric McArthur MBE.

Note: - weaker colonies have tendency to collapse in March due to low numbers and lack of moral, even if they have plenty stores. For the rest, consider putting in some pollen substitute and adding syrup in a contact feeder if the weather is keeping the bees in.

Beware March Losses! - Colonies can make it through winter and give you the impression that they are doing well only to die out in a cold March just before spring has fully arrived. This is commonly down to numbers being critically depleted as old bees finally dye off and so few replacements created that the colony doesn't have enough to sustain itself remembering that there will be a small number of brood that needs to be fed and kept warm. Or down to isolation starvation due to continuing low temperatures restricting their movement across the frames to access food in the hive especially during the long cold night hours. Keeping an eye on where the cluster is and ensuring the feed is directly above it throughout the winter will help but if numbers are low at the onset of winter it may be impossible to avoid a colony loss at this point.

Unfortunately there is nothing to be done with a colony that is insufficiently strong enough to get going in March. The adult bees present will be old, spent and dying off, and any brood present is going to chill through lack of nurse bees to keep them warm or foragers to gather pollen. Any that survive will be in so few numbers that they simply won't be able to maintain or build up the colony. It's sadly a hit that every beekeeper takes sooner or later and one that they should learn from, i.e. making sure that winter preparations are properly observed to take only strong colonies through the winter. 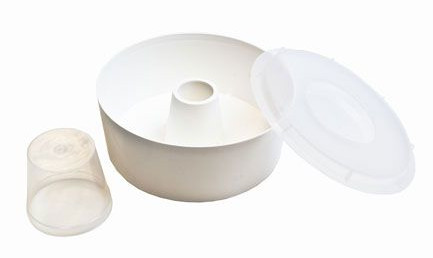 Easy to use low cost rapid feeder, can be topped up with syrup without releasing bees and is placed inside an empty super on top of the crown board.

Active bees in March means hungry bees, making it important for the beekeeper to keep an eye on the weather and the amount of available stores inside the hive, especially while the weather is still unpredictable. If they can't get out to forage due to bad weather, the internal stores deplete very quickly and starvation can occur within a surprisingly short time. Supplementing their stores at this time is good practice, putting on a rapid / contact feeder with heavy syrup will give the colony a boost if they need it, if they don't they will simply leave it alone. Refer to the Feeding page for a full description of syrup feeds. If they need feeding before mid March you should use fondant or candy as in the colder weather (lower than 8℃) the bees can't reduce the moisture content of the syrup down enough to store well, and it will start to ferment. Pollen substitute can be added alongside candy and fondant at this point to supplement any forage that the bees can't get to, make sure it is in date!

Feeders come in various forms to suit use on hives and nucs, and can provide an instant source of feed for the bees when hive stores are depleted and forage is in short supply or inaccessible. The majority of feeders are designed to go on top of the hive or nuc, but others are designed to feed at the entrance, or from inside the hive or nuc (frame feeder). Contact feeders are generally a container which can be sealed once filled, and has a small fine mesh aperture underneath which allows the bees to suck the feed down. Rapid feeders allow the bees to crawl in and directly access the feed, and can conveniently be topped up without opening the hive and releasing or disturbing the bees.

Hefting hives, by gently lifting the hive one side at a time at the base will give an indication of how much honey reserves they have left. Using a spring balance to check the weight of your hives at the end of the autumn when you are preparing the hives for winter is good practice. Good record keeping and experience is required for this, knowing what stores were in the hive before winter is important, ideally they should have 30 -40 lbs of honey stored in the hive before winter. Be prepared to supplement their feed with fondant, candy, or sugar bags if and when required. Starvation occurs very quickly after stores run out, especially in winter.

From January to March it is still too cold to open up the hive and carry out inspections, and realistically it is not necessary. Early spring activity increases very quickly and much can be determined from observing the activity at the front of the hives. If in good weather the bees are flying and bringing in pollen then all is probably well and indicates a laying queen. On a sunny day it is possible to have a a quick look under the crown board to check if the bees have moved up into the top of the hive having used up the lower stores, and also to check or top up any candy / fondant reserves. Be on the look out for build up of dead bees blocking the entrance, a normal winter occurrence, clear it if necessary. Mid to late March consider putting in some pollen supplement and a contact feeder with syrup if the weather is unsettled.

The first spring inspection - an exiting moment in any beekeepers calendar, the time when you hope to see all the signs of a healthy laying queen and an equally healthy amount of brood at all stages - everything to tell you that the colony that was healthy and well prepared at the end of autumn has over-wintered successfully. Timing is key, not too early when the weather may still return to winter conditions for a period causing the colony to re-cluster, and not too late when the colony build up is being restricted by available space. When the colony is building comb in the eke or around the fondant bags and storing honey, it's time to be thinking about a proper inspection!

When the weather has settled around the end of March / beginning of April and Spring has arrived along with more spring flowers and early fruits, the front of the hive should be busy with pollen laden bees returning. There will be young bees in the hive now boosting numbers and if there are no supers on the hives now is the time to put them on with a queen excluder after removing any candy or syrup feeds from the top of the brood box. A warm sunny day now is an opportunity to open the hive up and check for a laying queen, sufficient stores, and to carry out a general colony health check. Details of the seasons first full inspection are described in the Late Spring page.

If you haven't done so during the winter, early spring is a good time to check your equipment, suit, gloves, boots, hive tools, queen traps and marking medium, take stock of spares, affect any repairs to hive components and tidy up around the apiary. De-coke the smoker and make sure your tool box has the necessary equipment and consumables ready for the season.