Honeybees naturally live in places where there is space and safety for them such as a hole in an old tree, or wall, or a roof space which provides protection from predators and the elements. Beekeepers keep colonies of bees in hives, artificial homes offering the same conditions, and are generally made of red cedar wood or high density polystyrene. There are many different types available, some easier to use than others however successful beekeeping is down to the skill of the beekeeper rather than the type of hives used. For the beginner it is best to chose one of the more commonly used hive types, such as the ‘National’ or ‘Smiths’ types, so that getting extras components, spares and replacements is easy. Either of these two types are very good, it is simply a matter of personal choice, but chose one type and stick with it.

An Apiary - Summer and Winter

Hives and colonies need looking after in all seasons.

Note – the different hive type components are generally not interchangeable. Know the differences.

There is always a bit of trade going on with second hand bits, but be sure of what you are buying. Whatever type of hive you have, know how to recognise the different bits, and their dimensions, that’s very important. Your bees will build comb in which to house the brood and to store supplies such as honey, pollen and nectar, and they are extremely efficient at it, and very very precise in terms of measurement and construction. Hive components should always be to the recommended type and dimensions. Always sterilise any second hand components before use.

A typical hive will have the following components:

You can never have enough gear! It’s best to have spares at hand rather that finding out that you need something when you are in the apiary all suited up with the hive open and the air full of bees! At least two of everything is essential, and it’s amazing how much stuff you accumulate over time.

Beeswax - The main honeycomb building material is beeswax, secreted from glands on the bees bodies as tiny scales. This is used to construct the honeycomb, the hexagonal cells. They will build comb from scratch if necessary but beekeepers tend to fill frames with foundation (a flat sheet of wax with the hexagonal shape embossed across it) to give them an easy start and to get the comb in the right place. New comb is cream white in colour and darkens over time and use in the hive. The comb creates the main structure of the bees nest, and houses the brood and stores of honey and pollen.

Propolis - The other material that bees use is propolis, a sticky substance that they make using tree resin and which they use to stick things together, fill small gaps, and to strengthen things. It is dark in colour, very sticky, is quite difficult to remove and has a distinctive but not unpleasant smell. Hive components should fit together correctly, drafts are a major problem especially in winter. Brood (eggs and larvae) need to kept at between 32 and 36 degrees Centigrade, and they are easily chilled and die.

Beespace - This is the space that the bees move around in within the hive, and they are very particular about how much space there is between things. Beespace is widely recognised as being between 4.5mm and 8mm depending on whether the situation requires bees working individually or back to back. Hive components are designed with this in mind so no need to worry as long as you are using the correct type for type components.

Bees spend a lot of time measuring, and if there is a small space or gap they are not expecting they will fill it with propolis (the sticky substance they make from tree resin), and if the there is a large gap they will fill it with brace comb (bees wax) making hive manipulations tricky. Hive components are designed to allow the correct beespace between components and between upper honey supers and the lower brood boxes.

Note - The National Hive uses a bottom beespace design, meaning that once assembled the beespace is below the frames, while the Smith Hive has a top beespace design. Again its important to make sure all your gear is of the same type.

Foundation - The frames that go inside the deeps and shallows are specific to the type of hive in terms of length and height. However the cells structure created be the bees is always the same. You normally buy frames in self assembly packs and they are straight forward enough to assemble but only use the correct frame nails and in the correct manner. The assembled frames are filled with foundation, a flat sheet of wax with the hexagonal shape embossed across it. The foundation should be of the correct dimensions for your type of frames. Once the bees have built (or drawn) the comb onto the foundation they will put it to immediate use for brood or stores.

Foundation is easily damaged, filling frames with foundation shouldn’t be carried out on very cold or very hot days. There is a knack to this and is usually part of the beginners classes, but if you chose not to go to classes a mentor will show you what’s what.

Two qualities of foundation are available, both are good, and can be wired or un-wired. The wired type is normally used in the deep brood box to give the comb extra support during manipulations, and in the honey supers when you are going to harvest honey by using a spinning extractor. If you are going to use the crush and filter method of harvesting honey then un-wired is best in the supers. How you harvest the crop is a personal choice. Always collect old and used wax to trade in for new foundation.

There a many types of hives available today, they are all good enough in the hands an experienced beekeeper. They are very much a matter of personal choice, every beekeeper extols the virtues of the type they prefer to use, but success is more down to expertise than hive design. The following are notes on some of the more notable designs.

A modern skep made from straw, could be made from other materials as available.

Sometimes known as a 'Ruskie' in Scotland, the skep was the original container used for keeping bees on the farm or estate, and easily made by the beekeeper from local straw, willow, or heather. They are the traditional upside down dome shape and were protected from the elements with whatever was available, or kept in alcoves in walls known as 'Bee Boles'. Harvesting the honey necessitated evicting the entire colony from the skep, sometimes by drumming them out with a stick. It was a wasteful method and particularly unkind and destructive to the bees. Skeps can still be purchased and are often used for taking swarms.

The Langstroth and Modified Dadant Hive 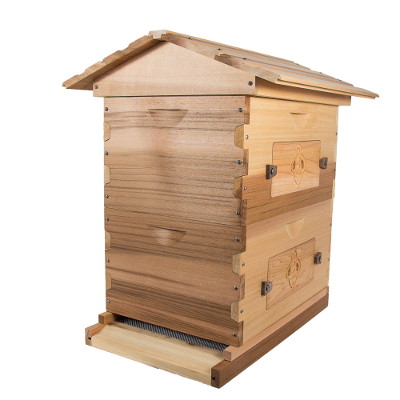 Lorenzo Langstroth is largely credited with discovering the 'bee space' and inventing the vertical, modular, removable frame, wooden hive system widely used today in the 1850s. It involved standard sizes and interchangeable hive components. Langstroth and Dadant hives are usually 10 to 12 frame styles and are a larger design suited to the prolific bee strains found in America, and although found in the UK are not particularly suited to UK bees. Prior to Langstroth it is likely that many beekeepers came up with their own particular wooden alternatives to the Skep. Most hive manufacturers today use the Langstroth system in their design. 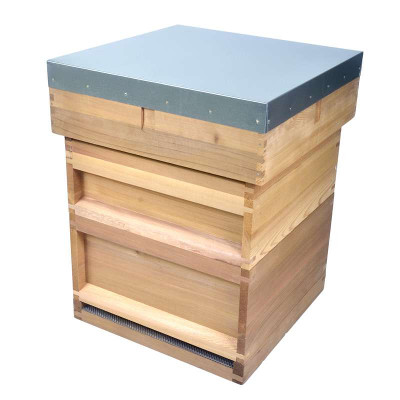 A popular and widely used hive, supplied with flat or pitched roof.

One of the most popular hive designs used in the UK, appeared in its first form in the early 20th Century and comprised a double wall design with finger grips cut into the outside, and featured the long lug type frames and bottom bee space. This was later modified to have hand grip bars either side of the boxes to make lifting easier. The National uses the Langstroth vertical system of a floor, a deep box for brood, and queen excluder, a shallow for honey stores, a crown board, and a roof, and all to standardised sizes for the convenience of managing many colonies. 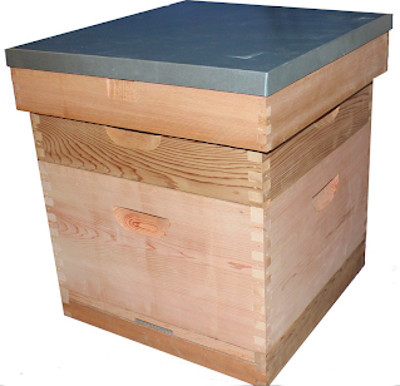 A popular hive in the Scotland, compact and convenient for migratory beekeeping

An invention of William Smith of Innerleithen, Peebles, is a single walled hive with the same internal dimensions as the National Hive but lacking the outer hand grip bars, and features short lug frames and top bee space, making it a simple compact design very popular in Scotland and Northern England where migratory beekeeping to the heather is practiced. The Smith and the National Hives are the two most popular hive designs used in the UK today. 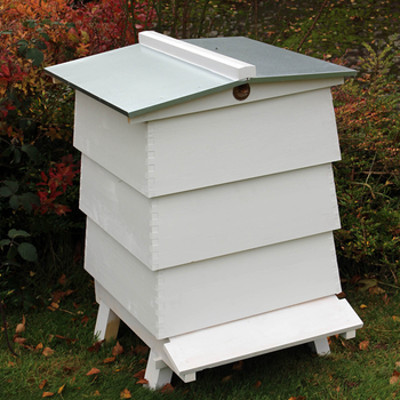 To most this is the classic white beehive, and is still popular but costly.

William Broughton Carr designed this hive with the damp UK weather in mind in the late 1800s, and comprises a stack of light weight inner boxes surrounded by a stack of outer shells (lifts) to give extra insulation making it quite a substantial construction. The frames are of British Standard size, however due to the double skinned nature of the assembled hive, it is difficult to transport colonies, is big and very heavy, and is more costly requiring more components than the alternatives. It was at one time very popular in the UK. The original WBC design has changed over the years but is still available and in use today. 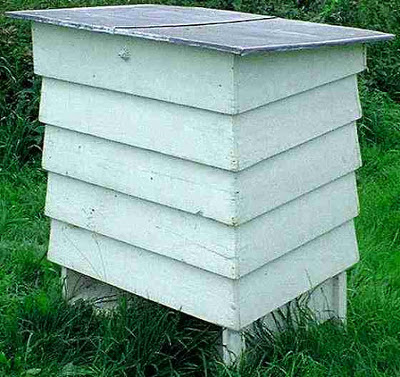 A big double skinned hive with an under floor entrance for the bees.

This was another Scottish invention at the turn of the 20th century, and utilised the WBC double skin stacking design but with an under floor entrance and 15 British Standard deep frames to accommodate larger colonies for the heather moors. These are very large hives and are not easily moved but could be very productive in the right place. 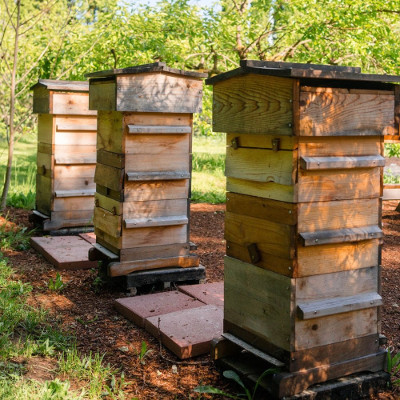 Warré hives, known as the 'Peoples Hive', have been around from the mid 20th Century and have become popular due to their design and use which replicates more closely a natural bee nest as it would be in a tree trunk. The design principal focuses on the bees needs more than the beekeepers and operates a foundation-less system where the bees build from wooden bars in the top of the box. As in nature the bees use the top part of the drawn comb for storing honey and the lower for brood, and only needs opening once a year. 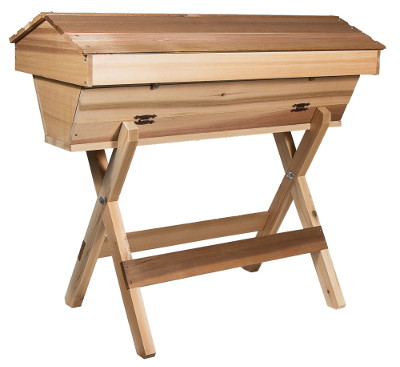 Another alternative way to keep bees and produce honey, working on the principal of letting the bees do what comes naturally, and is a fairly low-tech way to keep bees, but requires a good level of beekeeping knowledge and expertise. The hive has no frames or foundation but uses top bars packed together instead of a crown board. The bees free range inside the bee space and build their nest from scratch from the underside of the top bars.

Other Hive Types - The were many other types of bee hive, some still manufactured and some out of production, many using the British Standard frame sizes, and others that don't. Beekeepers have long been known for their inventiveness and during the move from Skep to removable frame hives, there were as many individual designs as there were beekeepers. Wormit Commercial hives were made in Fife by Steele & Brodie until the 1990s, and were very popular with commercial beekeepers due to their interlocking weather-proof design.