Sacbrood - is a relatively common disease caused by the virus Morator aetotulas, and does not usually cause severe colony losses. It is commonest during the first half of the brood-rearing season and can often exist unnoticed affecting only a small percentage of the brood. In a healthy colony adult bees detect and remove infected larvae very quickly. Normally by the time the beekeeper spots the symptoms the disease has become too severe for the adult worker population to handle. Both worker and drone larvae are affected. Pupae may be killed occasionally, whereas adult bees are immune to it, and dead brood is often scattered among healthy brood. The cappings over dead brood are first punctured and later removed by the bees. Death usually occurs after the cell is sealed and the larva has spun its cocoon.

Note: This is a not a notifiable disease however any suspected incidence of Sacbrood should be remediated without delay, inform your local beekeeping association / community to alert them of its presence.

Download the Sacbrood Info Sheet to obtain a printable version of Sacbrood information, detection and treatment methods for your records. 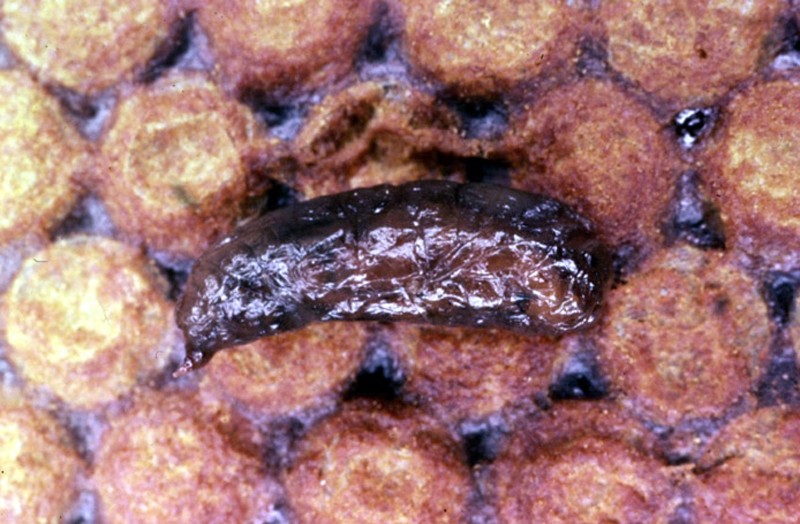 Dead larva infected by sacbrood appear typical dark with a raised head and may be removed in one piece. Sacbrood 'mummies' are recognised as being a dried out dark brown scales, sometimes known as 'Chinese Slippers'. The larvae gradually change from pearly white to dull yellow or grey and finally to black. The head of the larva, the first part of the body to change colour, becomes black. Larvae die in an upright position with raised heads.

Diseased larvae are easily removed intact from the cells, unlike those afflicted with American Foul Brood. The contents of the larvae are watery, and the tough outer skin appears as a "sack or bag of fluid" when suspended. The dried scale lies flat on the lower side of the cell, with the head end raised and the tail flat on the bottom of the cell. The scales are rough and brittle and do not adhere tightly to the cell wall.

Examination of brood frames and floor debris is required especially in spring. Bees should be gently shaken from the frames to allow full inspection, abnormalities are then easily spotted. Sacbrood 'mummies' are recognised as being a dried out dark brown scales, sometimes known as 'Chinese Slippers', lying along the bottom wall of the cell.

Monitoring - Vigilance is important with all honeybee diseases. Check all apiaries and colonies regularly for health and suspect any colonies that are not thriving where there is no already known reason. Colonies that are not performing well or die out should be examined thoroughly and treated to prevent robbing and spread of any disease present.

There is no specific treatment recommended for Sacbrood. The disease has only slight effect on healthy colonies but may have a more serious effect on weakened colonies. Prevention is the best method of controlling this disease by maintaining healthy, strong and vigorous colonies that display good hygienic traits. Good husbandry contributes greatly to overall colony behaviour and health, thereby avoiding the conditions in which Sacbrood can flourish. Colonies that suffer excessively from Sacbrood may need to be re-queened and the combs re-used after a few weeks. Disease prevention is best practice, maintain good apiary housekeeping: