Abnormal Drone Laying - drone cells are present in virtually all colonies during the summer months. The drone cells are easily recognised by their characteristic domed cappings and are usually found at the edge of the brood nest. Occasionally drone brood can be found in worker cells with or in place of worker brood and may be present as capped cells interspersed with vacant cells or cells at various stages of development.

Queens that are coming to the end of their fertile life or are young and not properly mated will become drone layers. A queen-less colony with no young brood with which to raise a new queen may have workers which will develop functioning ovaries and begin to lay eggs. The eggs of both these cases will be unfertilised and will naturally develop as drones.

Note: This is a not a notifiable disease. Any suspected incidence of Drone Laying should be remediated without delay, inform your local beekeeping association / community to alert them of its presence.

Download the Drone Laying Info Sheet to obtain a printable version of Drone Laying information, detection and treatment methods for your records. 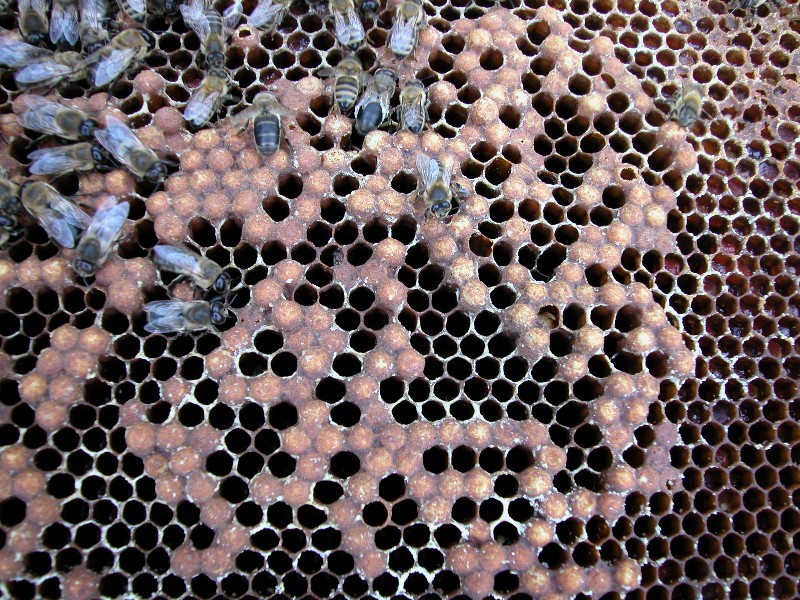 Brood pattern is irregular and interspersed with normal worker brood and drone brood, not restricted to the edge of the brood nest as normal. Several eggs may be laid in one cell, on the walls as well as at the bottom. The colony temperament may also be adversely affected by this condition. there are two possible causes of this condition:

Hive Examination - Examination of brood frames and floor debris is required especially in spring. Bees should be gently shaken from the frames to allow full inspection, abnormalities are then easily spotted.

Monitoring - Vigilance is important with all honeybee diseases and conditions such as Abnormal Drone Laying. Check all apiaries and colonies regularly for health and suspect any colonies that are not thriving where there is no already known reason. Colonies that are not performing well or die out should be examined thoroughly and sealed to prevent robbing and spread of any disease present..

Abnormal Drone Laying is not a serious disease, more of a condition existing in the colony. In normal circumstances it is easily recognised during routine hive inspections. If a queen is present it is likely that she is failing through old age or she wasn't fully mated to start with and has run out of sperm. Colonies suffering from Abnormal Drone Laying may need to be re-queened from a reliable source. If there is no queen present then one or two workers will have taken to laying eggs which are infertile, this is a trickier situation to resolve as the colony may not accept a new queen readily. Use a slow release queen cage, or alternatively remove the frames with worker laid eggs and put in a frame of eggs and brood from a known source, it may take a couple of attempts. Prevention is best practice, maintain good apiary housekeeping and bee husbandry:

There are no vectors identified for this condition. Drone Laying occurs when the queen is absent, or has failed.