Braula (Braula coeca) - also know as the the beelouse, is found in colonies of the honey bee (Apis mellifera), where it lives on the bodies of the bees and literally steals its food out of the mouth of its host. Having said that it is neither a mite, a parasite, or true louse, but a tiny wingless fly. The beelouse is found on worker, drone, and queen bees, and as many as 187 have been recorded on a single queen bee! It is generally believed that the beelouse causes little or no harm to bee colonies, but in beekeepers' apiaries they should be considered a pest as the larvae cause damage to the appearance of comb honey by burrowing under the cappings. Most beekeepers practice mechanical control of Braula unknowingly by extracting honey because the Braula larvae are eliminated while removing cappings before extraction. Braula also known to over-winter with the adult bees.

Note: This is a not a notifiable disease however any suspected incidence of Braula should be remediated without delay, inform your local beekeeping association / community to alert them of its presence.

Please download the Braula Info Sheet to obtain a printable version of Braula information, detection and treatment methods for your records. 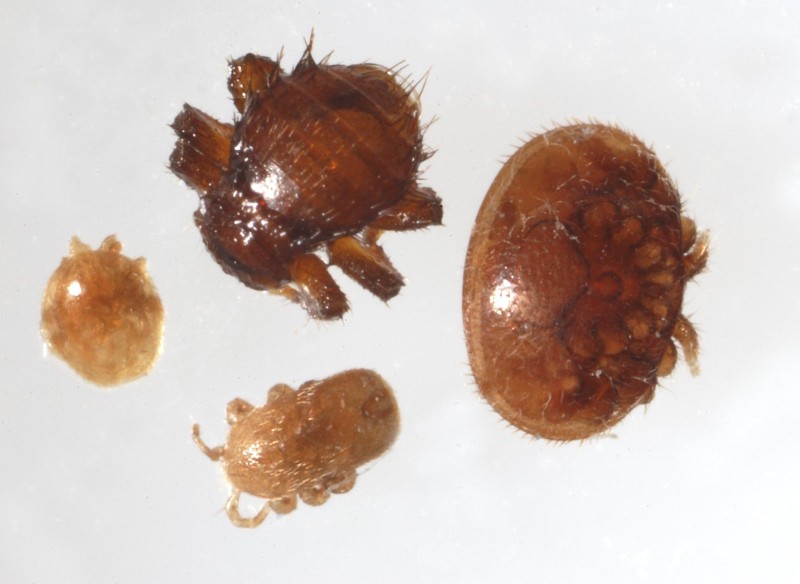 Braula is a six legged insect or more precisely a wingless fly. It is remarkably similar to the Varroa mite (an arachnid with eight legs) at first glance due to its colouration, size and form, but on closer inspection the similarities disappear. The Braula coeca looks more spider-like than the flatter crab-like form of the Varroa destructor.

Eggs: Eggs are white, oval-shaped, with two lateral flanges which are flat and extend parallel to each other and to the long axis of the egg. Including the flanges, a typical egg measured 0.84 mm by 0.42 mm. Eggs may be deposited in various places in a hive--in empty cells, on brood cell cappings, or on wax dirt on the floor of a colony, but only eggs that are laid on honey cappings hatch. Incubation period for eggs varies from two days during summer to 7.4 days during winter.

Larvae: Larvae emerge from the attached end of their egg where they begin constructing a tunnel under cappings and sometimes on the walls and bottoms of cells. These tunnels give cappings of infested comb the appearance of being intersected with fine fractures, similar to the mines of a leaf miner. Larvae feed upon honey and pollen grains within the wax of their tunnels. Bee louse larvae pass through three instars, requiring from 7.1 to 10.8 days to complete larval development, depending upon the season of the year.

Pupa: The prepupa ranges from 1 to 2.7 days and appears cream-white when viewed through the transparent larval skin. The pupa is enclosed within the unmodified cuticle of the last larval instar and is white or yellowish in color, 1.4 to 1.7 mm long by 0.5 to 0.75 mm wide.

Adult: The beelouse has eye rudiments just above the antennae seen as pale spots on the cuticle surface surrounded by more darkly pigmented chitinous rings. There is no trace of Page 1 of 3wings or halteres. The tarsi are 5-segmented; each terminal joint contains a comb-like structure, divided in the middle, with a variable number of teeth. The combs allow Braula to cling tightly to the host.

Hive Examination - Careful examination of the hive and brood with a magnifying glass, be on the look out for and pests such as the beelouse. Abnormalities of the brood nest and combs are generally easily spotted.

Monitoring - Vigilance is important with all honeybee diseases. Check all apiaries and colonies regularly for health and suspect any colonies that are not thriving where there is no already known reason. Colonies that are not performing well or die out should be examined thoroughly and treated to prevent robbing and spread of any disease present.

There is no specific treatment recommended for Braula although it is suspected that Varroa treatments have the same lethal effect on Braula as on Varroa mites. The disease has negligible effect on healthy colonies. Prevention is the best method of controlling this disease by maintaining healthy, strong and vigorous colonies that display good hygienic traits. Good husbandry contributes greatly to overall colony behaviour and health, thereby avoiding the conditions in which disease can flourish. Disease prevention is best practice, maintain good apiary housekeeping:

Its worth noting that the beelouse lives naturally with honeybees as do other lice with their hosts. It is entirely possible that through other disease treatments the bee louse could become an 'endangered species' itself.