The Asian Hornet (Yellow-Legged Hornet) Vespa velutina nigrithorax (the nigrithorax colour description no longer used) is native to South East Asia, and until recent years was restricted to that region however it found its way to South Korea and Japan then to South West France in a consignment of pottery imported from China in 2004. It has since spread rapidly through France, Italy, Spain, Portugal, Belgium and Luxembourg where it has become a significant pest that continues to spread across Europe. It has been found most recently in the UK where all nests reported were subsequently destroyed. They are voracious predators, and a very invasive and successful species that will no doubt continue to arrive on our southern shores one way or another and will likely establish themselves there in the next few years. They are understood to be intolerant of the colder northern UK climates and are unlikely to establish on Scotland.

Note: They are slightly smaller than our native European Hornet and possess a similar sting to our native hornet, wasps and bees. They are generally not aggressive, however they have the habit of defending their nest 'en masse' and are known to deliver stings in enough quantity to cause children and ailing adults serious problems including anaphylactic shock and death.

Note: This is a notifiable pest. Sightings of Vespa velutina must be reported without delay to your local Bee Inspector. Inform your local beekeeping association / community to alert them of its presence and record its presence on the UK Asian Hornet - Alert website.

Do not approach any Vespa Velutina nest without suitable all body personal protective equipment. 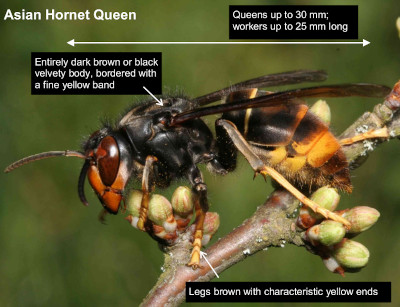 Vespa velutina is a species native to South East Asia which resembles our native European Hornet in shape and form but is slightly smaller (V. velutina workers 25mm long in comparison to 30mm V. crabro). It is fairly easy to distinguish by its overall dark brown / black body with a single yellow band across the posterior and distinctly yellow legs compared to our mostly yellow native species with brown legs. During the season, April - November, they build a very large pear-shaped paper nest (typically 600mm wide by 800mm tall) mostly in trees over 10m tall, but also in buildings, outbuildings, electricity pylons, in hedges and occasionally in dense scrub on the ground. The nest is a significant structure accessed through a hole in the side and is where they rear thousands of young in a season. They will vigorously defend the nest against any intruder and are known to group charge on intruders to sting them. Their sting venom is much like our own native hornet, bee and wasp's but they collectively deliver much more of the venom which can have a dramatic and dangerous effect on humans and animals. Their stinger is considerably longer than the honeybees and will penetrate normal apiary PPE. In the apiary their habit of hawking at the front of honeybee hives / nests makes them easy to study and identify by their very dark colouration and single yellow band at the rear end. They are a very aggressive predator of honeybees and many other insect species which in the UK have no natural defence or resistance. They pose a significant threat to our honeybees and pollinators. 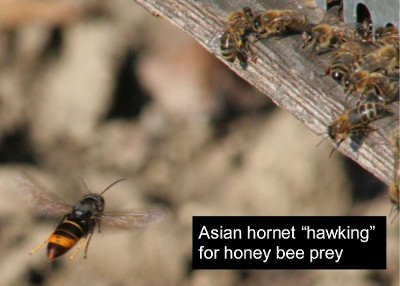 The yellow band makes the hornet easy to spot as it hawks in front of the hive. Note the defensive behaviour of the guard bees at the hive entrance, the presence of the hornet creates high levels of stress in the colony.

Effects on Apis mellifera colonies - Once a honeybee colony is located the Asian Hornet will hawk at the entrance of the hive or nest and snatch returning honeybees then fly off with their catch to feed their young. As they fly off they are immediately replaced by another hornet, gathering in numbers and continuing to predate and deplete the honeybee colony. The threat to our bees is two-fold, firstly by significantly reducing numbers through persistent predation, and secondly by stressing the bees and changing their behaviour from foraging to continual defence which consequently depletes the stores within the hive to critical levels and colony starvation.

Life Cycle - The Asian Hornet is typical of all Vespa species in their life cycle, starting in spring with a single queen emerging from her winter sleep to build a small starter nest of paper (primary nest) similar to our wasp's with the entrance underneath, but is about the size of a tennis ball. She lays a few eggs and raises them and when their numbers reach around 70 - 80 the new workers will have taken over all nest-building, foraging, nursing and feeding duties, leaving the queen to lay eggs. In late spring / early summer most colonies at this stage set about building a bigger nest nearby and higher up and is where the colony generally moves to. The entrance to this much larger structure (secondary nest) differs in that it is located in the side rather than below. The foragers collect nectar and prey to provide the necessary carbohydrate and protein to feed the growing larvae and the colony will build up to reach maximum numbers, around 6000, by late summer. Drones and young queens are produced at the end of summer and onset of autumn, drones first. A colony can produce anywhere up to 500 young queens that will be fertilised before leaving to to find some cozy nuc to overwinter either singularly or in groups. The drones die after mating as does the remaining colony in the nest as the temperature drops and winter sets in. Their season is from April through to November and they pose the greatest threat to honeybee colonies in late summer, August and September, just as our wasps do when their own colonies have the greatest number of mouths to feed. They can't fly as fast as a honeybee (10kph compared to the honeybees 25kph) so resort to hawking around the front of the hive waiting to ambush returning bees. Each Asian Hornet can capture up to 30 honeybees per day and take them back to their nest. Left alone they have the potential to quickly reduce a honeybee colony to critically low numbers in a short time. Mature Asian Hornet nests multiply exponentially year on year, and with up to 500 fertilised young queens produced each year they can spread rapidly.

Hive Observation - Although similar in shape and form to our native hornet there are distinct differences. The size, dark colouration and hawking flight pattern make the Asian Hornet fairly conspicuous around the apiary and particularly at the hive entrance. They leave no trace of their presence so visual observation is the key. Locating their large nest is surprisingly tricky, they are often high up or well hidden while the flying hornets are difficult to track without radio tracking technology, not something found in the usual beekeepers toolbox! Observing the 'vanishing direction' of hornets leaving the apiary can produce a general direction but setting and observing bait traps across an wider area to triangulate the nest location can produce better results but is time consuming. In early spring young Vespa velutina queens are known to seek out Camellia flowers for nectar and will be noticeable to members of the public as well as beekeepers and may report them. The National Bee Unit has the responsibility of locating and destroying nests. Do not approach Asian Hornet nests yourself.

Monitoring - As with all honeybee related pests and diseases vigilance is the key. The National Bee Unit is currently responsible for tracking down and eradicating Asian Hornet nests, however they have limited capacity and beekeepers will need to manage problems within their own areas sooner or later. Monitoring traps are widely available and should be used where the presence of Vespa velutina is suspected. Other forms of traps to capture larger numbers of hornets are being developed across Europe, some very successful although they also trap our native hornets Vespa crabro which is non-target species. 'Capture and Release' of an alien species such as the Asian Hornet is not permitted under law without a permit.

Apis mellifera has no natural defences against the Asian Hornet, eradication of the colony and destruction of the nest is the only option. They are a minor pest in their native country due to natural defence behaviours of native Asian Apis cerana honeybees, but pose a major threat to Apis Mellifera in Europe and the UK, left untreated they spread exponentially year by year. Any sightings of this pest should be reported without delay to allow eradication. When they are suspected in the apiary bait traps should be used and checked regularly during the season. 'Muzzle Traps' may be a useful means of trapping and killing the hornets in the apiary until the authorities locate and destroy the nest.

Note: Do not attempt to remove an Asian Hornet nest yourself, inform your Bee Inspectors who will remove it safely.

Vespa velutina, is an invasive non-native pest and a voracious predator of honeybees. They are present in the north of France a short distance from our shores. Once established in an area it will be difficult to remove.

Note: Once established the nests of this species are difficult to locate and eradicate and will spread exponentially across large areas.