Acariosis is a disease of adult bees. The tracheal mite (Acarapis woodi) or Acarine mite is generally considered the major contributory factor to ‘Isle of Wight disease' in the early 1900s on the Isle of Wight which decimated it's honey bee population, later spreading to mainland UK. More recently it has had a devastating effect upon the beekeeping industry in North America after it's introduction in the 1980s from Mexico. In the UK Acarine is not usually a serious disease, with relatively small numbers of colonies being affected. There are no widely recognised visible external signs of this disease and flying ability is not affected, however the life span of over-wintering bees can be shortened. 'K wing' and 'crawling bees' are thought to be associated with Acariosis in some cases.

Note: This is a not a notifiable disease however any suspected incidence of Acarine should be remediated without delay, and inform your local beekeeping association / community to alert them of its presence.

Download the Acarine Info Sheet to obtain a printable version of Acarine information, detection and treatment methods for your records. 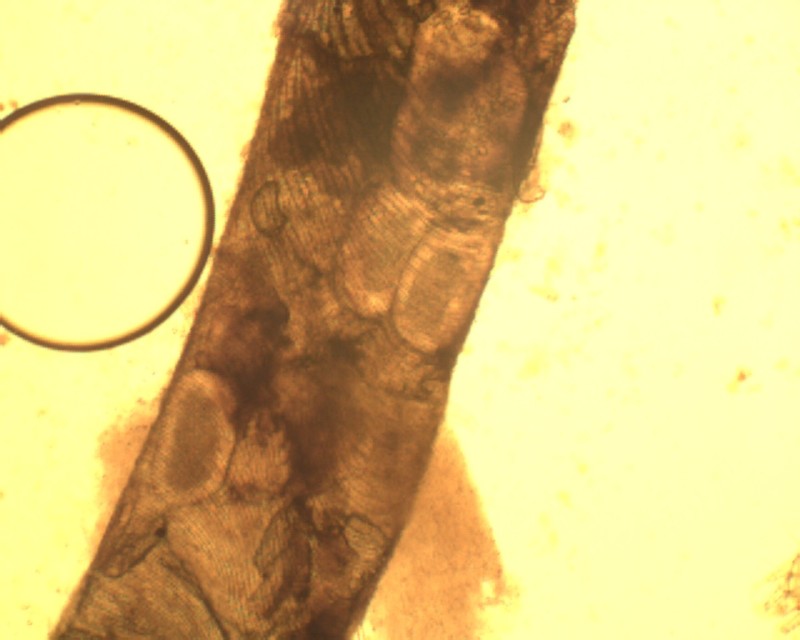 Acarine eggs in the tracheal tube

There are no widely recognised visible external signs of this disease and flying ability is not affected, however the life span of over-wintering bees can be shortened. 'K wing' and 'crawling bees' are thought to be associated with Acariosis in some cases. Diagnosis is only by dissection and microscopic examination of the primary trachea. A healthy trachea will have a uniform, creamy-white appearance. Infested tracheas will show patchy discolouration or dark staining and also eggs, nymphs and adult stages of the mite. Suspect colonies should have samples taken and sent off to SASA in a paper bag for analysis.

Life Cycle - The complex system which delivers oxygen to the honeybee is comprised of tubes called trachea and air sacs. It is in these trachea that the Acarine mites reproduce and feed. Mature female mites enter the anterior thoracic spiracles of young bees (bees are only susceptible to infestation within the first nine days after emergence). The mites lay their eggs in the trachea and upon hatching the larvae begin to feed on the haemolymph (blood) of the bee. The larvae undergo several moults before reaching their adult forms, and are then ready to infest new hosts. There do not seem to be any effects upon the activity of the working bees, the main consequence is to shorten the lifespan of the over-wintering bees. This may lead to ‘spring dwindling', where the winter bees die early in the spring, meaning that the expanding brood cannot be supported sufficiently leading to the demise of the colony. It has been suggested that if the colony goes into winter with greater than a 30% infestation then the colony is unlikely to survive.

Unfortunately, there are no clear early warning signs of this disease besides dead and dis-formed bees. Microscopic Dissection and Examination - Examination of the first thoracic trachea is required where the trachea will show patchy discolouration or dark staining. In addition the eggs, nymphs and adult stages of the mite may also be seen in the trachea.

Monitoring - Vigilance is important with all honeybee diseases. Check all apiaries and colonies regularly for health and suspect any colonies that are not thriving where there is no already known reason. Colonies that die out should be examined thoroughly and sealed to prevent robbing and spread of any disease present.

There are currently no approved proprietary products registered specifically for the control of Acarine in the UK although approved treatments for Varroa mite are thought to reduce the incidence of Acarine mite (also an arachnid). As with most cases it is important to practice good husbandry and to maintain vigorous, healthy stocks, which are better able to withstand infestations. Some strains of bee are also more prone to infestations than others. It is therefore important to carefully select which strain of bee you maintain and not to breed from those stocks that appear predisposed to Acarine. Disease prevention is best practice, maintain good apiary housekeeping:

Mature female acarine mites leave the bee's airway and climb out on a hair of the bee where they wait until they can transfer to a young bee. Once on the new bee, they will move into the airways and begin laying eggs.

Note: beekeepers are the principal and most rapid means of spreading bee pests and diseases.